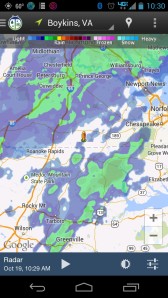 I’m getting closer to my R12 goal. I didn’t make an attempt at a permanent on October 5/6 due to the Sea Gull Century. It was raining almost continuously for the next week or so. As a result, I opted to skip October 12-14. With only two weekends left in October, I knew I had to jump on even a less-than-desirable Saturday to knock out a perm. Rain was in the forecast; but thunderstorms were not. A rainy October ride seemed fitting since that’s how my very first permanent turned out last October. Brent, aka “RecumBrent,” was the only rider to accompany me. There are only three control points on this out-and-back route. The stop at Boykins Beans & Ice Cream was used twice. We had ridden through some heavy mist and even encountered wet roads. Mounting the fenders was a good move even though it did not rain. I snapped this radar image on my phone at our first stop in Boykins around 41 miles into the ride. Brent said he would have stayed home had he seen so much rain ahead of us. It seemed like a miracle that we weren’t drenched. We were headed almost due west toward Skippers, VA. The rain system was moving northeast which put us constantly in the dryer areas. We followed the rain as we returned east. However, the roads were dry for the rest of the day. 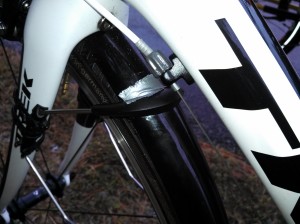 Today’s ride was the first of the cooler rides since April. It was 57 degrees at the start of the ride. I wore tights, a wool base layer, a short sleeve jersey and a vest. I also wore my reflective yellow vest and ankle bands since I was expecting bad weather. I was overdressed a tad because of the forecast and figured the extra layer would help keep me warm… and the wool to keep me dry. It eventually warmed up to 68 degrees. I removed the vest fairly early in the ride. I kept the base layer donned and was just a little warm. The wool was damp; but my skin felt great. I love my WOOL! On a different topic, I had just one nagging “mechanical” issue: fender alignment. This is the same ride during which I had fender issues earlier in the year. The more these fenders are adjusted the easier they slide. They weren’t staying put. I needed to fix them in place once they were aligned. I’m known for carrying just about any tool one would need. But Brent saved the day by having duct tape in his tool kit. I needed just a little to jam into the fender tabs. Here’s a photo of my temporary fix. 🙂 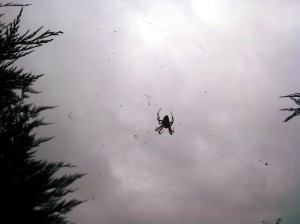 The dreary route was somewhat boring. It was nice to have Brent along for good conversation. But I have to talk about the dogs. There were LOTS of them: large, small, fast and slow! The most interesting of them was a trio of Jack Russell terriers around mile 38. I’m told they usually come running as soon as they hear the click of a shifter or the ratcheting of a free hub. If you’re riding with Brent, then they charge the road as soon as he whistles for them. They were swift and determined as they charged right at me, passing in front and then heading straight to my heels. I can’t even recall what Brent was doing. They didn’t appear to care about him… JUST ME! I simply maintained my 17 mph speed and kept an eye on them. The alpha got fairly close to my heel. But I don’t think he was interested in a bite. I’ve found the vast majority of dogs who chase us only want to escort us to the point where we no longer matter to them. Since we were on an out-and-back, that meant the trio we encountered at mile 38 was to be found again at mile 94. Brent whistled as we approached. However, the little Jacks did not appear. Instead, we could hear hysterical barking coming from someplace deep within their property. Brent whistled again. The Jacks were going completely nuts! “In what cruel world must we live in which a cyclist can ride when we cannot chase?!” HAHA! The photo above is a random spider in a four-foot web I spotted at a knee break. 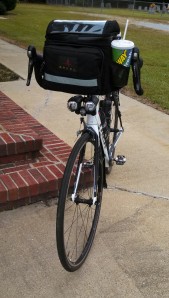 The mid-point control stop was a truck stop at I-95 Exit 4 in Skippers. The Subway was wide open with no one in line. We opted to eat there. I had a footlong and saved the chips for the road. I didn’t finish my drink; however, I was unwilling to toss it. Instead, I decided to see if my handlebar bag could double as a cupholder. SUCCESS is captured in this photo.  🙂  Conquering the proper stowage of a paper cup was a small victory compared to overcoming some ongoing knee pain throughout the ride. I’m not sure if it was because it had been over a week since my last ride, because of the cooler temps or if something was wrong. Stopping every 20 miles seemed to help for at least a little bit. My recovery ride the following day exposed even more pain, almost enough to abort a short, 15 mile ride. I’m keeping track of the pain as I take some time off the bike. In the meantime, I’m hoping the knee issue does not grow into something which has an impact on my R12 goal. I’m only two 200+ km rides away from the achievement. It would be a shame to have to take a longer break and start all over again. 😦

What’s a ride report from me if it doesn’t contain stats?  😉  Our rolling average was 15.8 mph. We finished in 10:52, meaning an overall average of  12.1 mph. That’s not bad considering all of the stops we made for fender alignments, sore knees, ice cream and lunch.  🙂  The ride was also longer than 205 km! Perhaps the ride originated as 205 km. But the cue sheet definitely accounts for 132 miles of riding. That’s 213 km. Perhaps the official titles cannot be easily changed. It’s a minor detail. No biggie! Daylight savings time ends next month. As a result, I expect to spend more time riding in the dark unless I manage to make my stops really brief. Think it’ll happen? Yeah… me, neither!  LOL!

I grew up near Houston, TX and served in the U. S. Coast Guard ordnance and electronics communities for over 35 years. I became involved with ham radio and computers in 1995. The explosion of technology made my jobs and hobbies quite interesting. My hobbies include Volkswagens, bicycling, photography/videography, electronics, ham radio, and web management.
View all posts by Scott →
This entry was posted in Permanents (200km+). Bookmark the permalink.