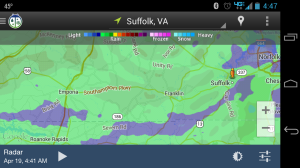 I rode my second run of the Suffolk-Lake Gaston 300 km on April 19th. It was the second ride in my planned pursuit of a Super Randonneur achievement. Since I had a decent finish last year (17h:15m), I was confident that I would be okay this year even though I wasn’t riding with the same strength just yet. The only downside to the morning was the weather. Here is a screenshot of the radar map when I awoke. Most cyclists, including me, don’t like to see a Saturday that looks like that. Regardless, I had already mounted my fenders and packed the rain gear to prepare for a long, wet ride. In addition to rain, it was 45 degrees and expected to warm to only 53 that day. I wore tights, a wool base layer, a balaclava, Gore Windstop gloves and my Gore raincoat. I also stretched a liner over my helmet. This was my attire for the vast majority of the day. 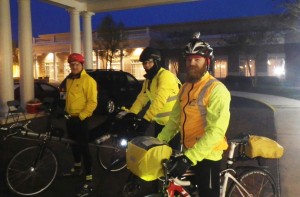 My adventure actually started the night before the ride. One of the lessons I learned after DNF’ing on last year’s ACP 400 km ride was to “use the host hotel.” Suffolk is only an hour away from my home. However, a brevet with a 6:00 am start really requires a 5:30 arrival for unloading, setup/dress and paperwork. That requires a 4:30 departure from my home, meaning a 3:45 am alarm setting in order to eat, dress and load-up the bike/gear. Awake at 3:45 am? YUCK! Staying at the host hotel allowed me to setup and pack the bike the evening before the ride, wake up at 5am, eat something I had picked up the day before, dress and take the elevator 90% of the way to the starting point. I awoke on my own at 4:45. Still, an extra hour of sleep and an easy morning with no packing/unpacking is a great thing! 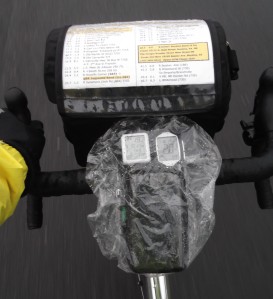 Three of us hit the road in light rain. We got into a decent groove, nothing too fast, with barely a need for headlights for the first hour. One rider, Tim, was riding a Domane with the same Arkel setup I often use on loaded rides. We talked setups for a while although I was riding my new CrossRip, aka “the tank.” We stayed together for about 30-35 miles. After a little bit, I decided to just stick to my own pace which was slightly slower than the other riders. We met at the first control point, Boykins Beans & Ice Cream, at the 42 mile mark. We had drinks and snacks; then left together. I don’t recall how long I stayed with them. I just rode my ride. Although I continued to fall farther behind, I was still comfortable as I rode, even in the rain. My attire seemed to be a good compromise between heat and moisture control. I was cold after each stop and preferred to zip up my coat for about 20 minutes to warm up. I was pleased with my CrossRip’s proper fenders. It was nice to have dry feet for the entire ride. My smartphone and computers were dry, too, thanks to a shower cap I carry for rainy days.  😀 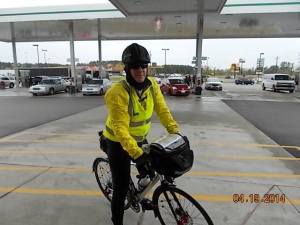 I made a brief stop for a tuna sandwich at the 65-mile control point in Skippers, VA. The other riders were leaving as I arrived. I stopped for a bit longer at the turnaround point, ~95 miles, and had two chili cheese dogs. By then, the rain had stopped and the roads were beginning to dry. My legs were plenty sore and my neck was beginning to fatigue a bit. But the big surprise was the beginning of a sharp pain in the center of my back, right in my spine. I had experienced it during last month’s 200 km ride, too. I figured it was a result of lost core strength or perhaps under-training. I was good for continued riding, though. I returned to Skippers and had a 6-inch chicken sub at Subway. I think I was there for 30 minutes of well-needed rest. Sure, my average speed while stopped was zero miles per hour, but I needed a stretch big time! I jumped back on the road and prepared for some night riding. 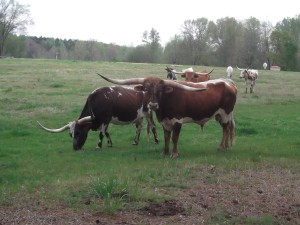 This is the last photo I was able to take with the remaining light I had. Yes, another stop. My back was really starting to bother me and I was falling flat on energy. I made it to the last control point in Boykins well within the allotted time, but just shortly before the store closed at 9pm. By then, it was clear that my pace was slipping to a degree where I had to keep moving or risk being late to the finish. My pace was slow and my pain was barely tolerable. To make matters worse, I was SLEEPY. I had recently read an article, “What To Do When Cycling Stops Being Fun.” I think I was doing well about breaking the ride into smaller segments. However, the smaller segments were hard to appreciate once I was so pressed for time that I could not stop at a usual resting place in Franklin. I just kept on rolling… tired, tired, tired. In retrospect, I suspect I really needed to eat more. Although I felt I was eating enough, I imagine I need to almost continually nibble on something to stay ahead of the energy game. My only company was a few nocturnal critters and deer. I called a good friend around 10pm or so. We spoke on and off throughout the rest of the ride to keep me awake. A bit of conversation was great for jump-starting my brain and keeping me mentally active. 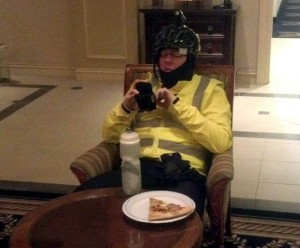 I finally finished the ride at 1:52 am, just 13 minutes before the cut-off time. I usually report an average speed in these blog entries. Why bother reporting anything other than SLOW! HAHA! My back was shot, my legs were Jello, and I really wanted to sleep! Here’s a photo of me just after finishing. Slouching in this chair felt GREAT! Okay… not really. It was just better than standing or sitting up. I was texting my completion so no one would worry about me after I fell into a deep sleep/coma. 😉  I had a slice of pizza, got a shower, and slept until 9:30. Again, getting the hotel room was a GREAT idea! I was so glad I did not have to load up the bike, drive home wet and cold, unload and then shower at 3am. 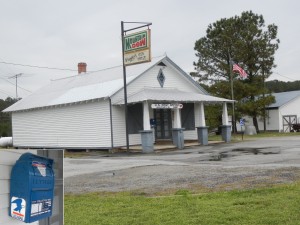 I intentionally held off on writing this blog entry because I didn’t want it to read as negatively as I felt after the ride. I didn’t want to dribble on with a bunch of pissing and moaning about my experience. Still, I have to take a realistic look at whether I can take on a 400k or 600k ride this year, especially without asking, “Why am I out here?” Staying awake is a MAJOR obstacle for me! Could staying well-fed provide me with extra energy and alertness? I also discovered a fitment issue with the CrossRip. Since the CrossRip was the one thing I had in common with the last time I had this specific back pain, I took new measurements of the bike and compared it side-by-side with my Domane. I found an extra centimeter in the CrossRip’s reach. I am researching options and will ride the Domane until I resolve this issue. I may also bring the handlebars up even higher to help with some neck issues. The neck pain is not currently a ride-stopper, especially on “short” rides like centuries. 😉  But I might as well take a swing at it while shortening the bike. 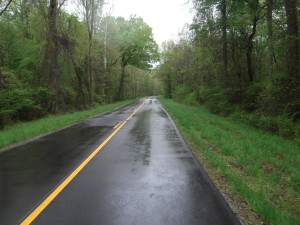 Looking at the road ahead in my continued pursuit of a Super Randonneur achievement, I think I’m going to defer it another season or at least until I’m riding the 300 km rides with more authority. Finishing a 300k “just in time” is painful and tiring. Trying a 400 at the same pace is not a good investment of my time and money (hotels). And there’s no way I’ll attempt a 600 unless I know I can ride fast enough to get decent sleep during the ride. I haven’t decided to quit. But I am falling back to reassess my plan. Hey – Everyone would rando if it was easy! I admire those who succeed on the long brevets, especially in the hills at speeds faster than a lot of our club’s flat rides!

I grew up near Houston, TX and served in the U. S. Coast Guard for over 30 years. I have an electronics background and continue to work in the electronics engineering field. I taught myself the basics about automotive systems as well as how to perform some of my own maintenance (cars and bicycles). I became involved with Amateur Radio and computers in 1995. The explosion of technology has made my job and several of my hobbies quite interesting. My hobbies include Volkswagens, bicycling, photography, electronics, amateur radio, web management, and reptiles. Visit my websites to learn more.
View all posts by Scott →
This entry was posted in Brevets (200km+), Super Randonneur Series. Bookmark the permalink.