The weekend of May 30-31 marked the final running of the Ocean to Bay Bike MS event, often called the “MS-150.” Bike MS is a fundraising event that benefits the National Multiple Sclerosis Society (MSS). The event began in Cape Charles, VA, rode 75 miles to Camp Silver Beach for an overnighter, and then returned to Cape Charles the following day. I first participated in this ride in 2011 and had a great time. It was a Bike MS weekend that hasn’t been topped yet. Read about it HERE. Once again, I rode with Team Killer Bees, the charity fundraising arm of the Peninsula Bicycling Association. The team has gotten smaller over the years. But its spirit is well-intact.

Everyone gathered for a photo just before the 7am departure. That was when I noticed that my handlebars were out of alignment. UGH! I had swapped out my stem and got the alignment looking good on a repair stand. However, stem alignment always seems to look a little different on the road. I find high-rise stems to be a little deceptive when judging their left/right bias. The team left without me (I think I waved them off) while I dug out a tool and made some quick tweaks. Knowing the team would roll around 16 mph, I decided it would be a good test of my heart to chase them after a warm-up. 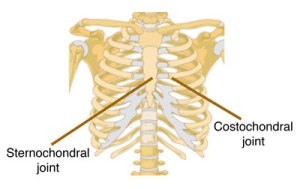 Let me back up a little: The Wednesday before the event, I had experienced some chest pain and got to enjoy an ambulance ride to the ER. All of my cardiac enzymes came back negative. So I was held overnight for observation and then had a stress echocardiogram (ECG) the following morning. The ECG came back clean. My diagnosis was costochondritis, or inflammation of one of the costochondral joints near my heart (see photo). I had no idea there were joints there. It put the pain where no one should take a risk. Anyway, if the ECG was the examination to show my heart is okay, then chasing down the Killer Bees for 13 miles with my heartrate between 165 and 175 was the practical proof that all is well.

The rest of the ride was a very-manageable 16-17 mph. Our Queen Bee noted in her report that “no girls had to pull… the boys did all the work.” I was happy to work, especially at that pace. However, the early chase irritated something in my right knee that still bugs me, even two weeks later.

We finished the 75-mile outbound trip around 1:30pm. There was a large, cheering crowd and Boy Scouts passed out cold, wet towels. It was refreshing. Lunch was being served, but I went straight to the shower and to claim a bunk. Experience has taught me that it’s nice to get that stuff out of the way before the masses finish the ride. I like a bunk near the AC. Years aboard noisy ships has conditioned me to appreciate both cooler sleeping conditions as well as the extra noise that comes with sleeping near the AC unit. I had a late lunch and visited with other Bees until dinnertime. I was surprisingly sleepy, so I skipped the evening program and was asleep fairly early. 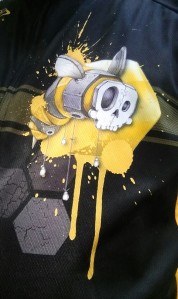 The Bees usually ride together as a team on the first day. Riders wear different jerseys and ride in separate clusters on Day 2. I tripped over a bee-themed jersey and decided to make it my Day 2 attire. The Queen approved! We stayed together for the first six miles or so. Then, when some of the group turned onto a shorter route, I took off with three faster riders. We were cruising between 19-21 mph and feeling good. The weather was ideal and the wind was not bad. Unfortunately, those ideal conditions were short-lived. We had a stiff headwind after about 15-20 miles. It lasted the rest of the day! One of the riders had to call it a day after the wind had worn him out. I was next to succumb to the less than ideal riding conditions and was dropped a few miles before the lunch stop.

Our threesome left the lunch stop together. But I could no longer maintain the speed of the other two Bees. My knee had had enough. Normally, those riders would not have left a rider behind. But they both know that, as a randonneur, I’m quite accomplished at riding solo. I encouraged them to continue without me. It was tempting to SAG back to Cape Charles. But there was no way I was punching-out of what was said to be the last-ever Ocean to Bay Bike MS ride. I maintained a tolerable pace and kept rolling. I stopped at the last rest stop just to give my knee a break. I visited with the staff as the only cyclist. I was there for 10-15 minutes without a single cyclist even coming into sight. We could see for over a mile… no one was out there. I couldn’t believe I was that far ahead of the bulk of riders. Did a bunch SAG back? I don’t know.

I continued alone and finished my ride at ~12:15pm. The finish was pretty anti-climactic. It was a letdown when compared to my first year. One Bee was at the finish and called out my name (Thanks, Peggy!). But no one else welcomed finishers as was done on Saturday. I don’t need the encouragement, but it’s was remarkably different to not have the crowd as I did in 2011 and for every Tour de Cure I’ve done. I remember the ho-hum finish in 2012, too, now that I think about it. I skipped 2013 and 2014 to pursue randonneuring goals. I had a low-key lunch and then drove home. The trip was relaxing.

I prefer to get these ride reports published in a timely manner. However, I’ve spent the past 12 days catching up on some club responsibilities and preparing for this weekend’s 600-km brevet. That ride starts tomorrow. So I’m glad to get this report posted, even if it’s not as polished as I prefer. I hope to have a good report about completing my first 600-km brevet as well as achieving Super Randonneur status.

I grew up near Houston, TX and served in the U. S. Coast Guard ordnance and electronics communities for over 35 years. I became involved with ham radio and computers in 1995. The explosion of technology made my jobs and hobbies quite interesting. My hobbies include Volkswagens, bicycling, photography/videography, electronics, ham radio, and web management.
View all posts by Scott →
This entry was posted in Special Rides. Bookmark the permalink.