It’s been a week since my third run of the Southern Sojourn 204 km permanent.  My new job has kept me focused on things other than blogging.  My first two runs were in October where I encountered plenty of rain and November where I rode mostly solo and in much cooler weather.  This run was in the heat with dry, ideal weather.  This was also my first time to ride this route on my Domane.  Three of us rode: Jacob, Keith and me.  We left promptly at 7 am.  I was hoping to keep up and was confident the warmer climate would help.  The most obvious difference between this ride and the others was the temperature.  I think it was in the upper 70’s when we left.  I wore summer attire and plenty of sunscreen.  It was very humid. 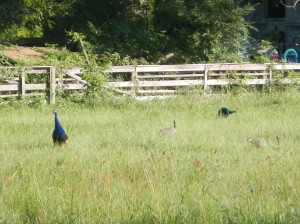 Keith flatted just 20 miles into the ride.  The humidity was readily apparent during our ten minute stop.  It took hardly any time at all for my glasses to fog up and for sweat to pool on my body without evaporating.  We had just passed a field where we could hear peacocks calling.  So I went back for a look while Keith replaced his tube.  Here is a photo of two peacocks and two peahens.  We got back on the road and stopped at a convenience store around 30 miles into the ride.  Our next stop was a closed store about 14 miles later.  It has a covered area that’s great for having a quick snack in the shade.  We spent plenty of time hovering between 17-19 mph.  Jacob said Keith and I were wearing him out.  Jacob is fast on his recumbent.  So I wasn’t buying it.  😉

The wind was from the east.  It was a crosswind most of the day and a hassle during only one stretch of the route.  Our first control point was 59 miles into the ride in Hertford, NC.  I had a nice pulled pork sandwich with coleslaw.  It was quite large.  I knew it would weigh on my belly for a while afterward.  It was also getting hot outside.  I think it was 90 degrees as we left Hertford.  I had slowed down a tad while I digested my food.  Jacob and Keith were riding slower than I expected, possibly because of the heat.  That was okay with me!  Our next control stop was 83 miles into the ride at Muddy Waters Coffeehouse in Elizabeth City.  I usually get a hot chocolate there.  But not today.  Instead, I grabbed an ice cream treat.  I think it was about 92 degrees when we left. 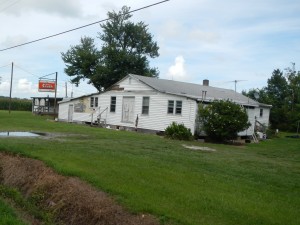 The last 32 miles went by nice and easy.  Keith, who I have perceived to be the fastest among us during previous rides, had slowed in the heat.  We all have our Kryptonite.  For me, it’s overdressing in the winter (and hills, turns and accelerating of any sort).  Others are affected by the heat.  Even though randonneuring is an individual event, I still have a hard time leaving anyone behind.  I ride this way on my local rides as well.  I don’t necessarily fall back and “pull” them to the end.  But I keep slower riders in sight to ensure no one winds up in a ditch, especially if it’s either really hot or really cold.  The last turn put us on a six-mile stretch that went straight to the parking lot.  This was the first time I had even ridden this stretch in daylight.  Jacob encouraged me to ride ahead.  So I slowly brought my speed up to 19 mph.  I managed to increase to 22 mph when the wind was right.  But I rode mostly at 19-20 mph for the final stretch. 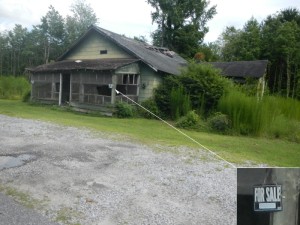 I arrived at the start/finish and picked up my receipt at 5:05 pm.  Jacob and Keith arrived as I was finishing up at the store.  We normally finish up the paperwork over dinner at a nearby Taco Bell.  However, the relatively early finish combined with a desire to get into a really cool space compelled me to complete my paperwork outside and hit the road for home.  My car’s interior cooled while I loaded the bike and my stuff.  I submitted my paperwork and hit the road for the one hour drive home.  WOW, that AC felt GOOD!  I had a good drive home and had dinner.  Dinner at home is not normally part of my plan after a permanent since I usually finish around 7 pm.  Finishing early was a nice change of pace.

My rolling average was 16.5 mph and my overall average was 12.6 mph.  I think that was my fastest rolling average but not my fastest overall average.  The heat compelled us to take longer breaks.  The breaks were welcome.  The faster rolling average was likely due to the heat.  That’s the case for me, anyway.  Not only did riding warm enable me to ride faster, I was also able to stay with the other two riders and accept some draft benefit from time to time.  I also noticed my neck was not sore at all.  My Domane gives me a slightly more upright riding position than my Madone… perfect for longer rides.  I also didn’t get beat up as much on the washboard roads (there were a few).  Between my 28mm tires, Brooks saddle and Domane’s “Iso” systems, I was actually quite comfortable.  Now I’m at “R7” with only five more to go for the R12.  🙂

I grew up near Houston, TX and served in the U. S. Coast Guard ordnance and electronics communities for over 35 years. I became involved with ham radio and computers in 1995. The explosion of technology made my jobs and hobbies quite interesting. My hobbies include Volkswagens, bicycling, photography/videography, electronics, ham radio, and web management.
View all posts by Scott →
This entry was posted in Permanents (200km+). Bookmark the permalink.