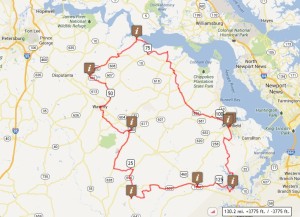 Although I’ve done a few big rides lately, my ride consistency has been lacking. I had ridden just three rides between the Two Rivers Perm on August 22 and this ride on September 15th. One of those rides was the Civil War Century. Although my local friends think I’m riding a lot, my saddle time has been really limited for a randonneur. Regardless, that was not going to stop my pursuit of an R-12. I planned this Sunday’s ride with good notice because my local bicycle club, Peninsula Bicycle Association, was hosting its annual Surry Century the day before. I had no plans to ride. Instead, I spent the day volunteering to support the ride. My Saturday/Sunday plan worked out well. In fact, it worked out better for a pair of co-riders. Jacob, Tom, Brent and I rode this run of the Wavorly-Smithfield Perm. Jacob and Tom rode a 400 km perm on Saturday, slept for about 4-5 hours and then joined Brent and me for this 200k. They are training for the upcoming 1200k Taste of Carolina grand randonee and needed to train under sleep-deprived conditions. 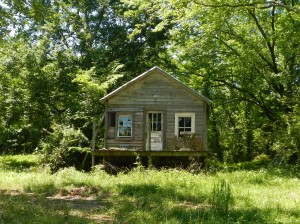 It was in the mid-50s at the start and expected to approach 80 degrees in the afternoon. I wore summer attire with arm warmers, knee warmers and a vest. Since Jacob and Tom (normally speed demons) had already ridden 250 miles, the pace was tame enough for us stay together. The ride was fairly tame and uneventful. The weather was great, the hills were few and the wind was very light. I don’t think the conditions could have been better. We encountered a few dogs to add excitement. But the excitement was limited for me since I’m usually calm around dogs. In fact, I don’t think I have anything terribly interesting to share about the ride. The pictures I’d share are about the same as last time. Unfortunately, I forgot my camera and didn’t take new any photos. However, I have this photo (right) leftover from the last time. I saw this house and many like it. Abandoned houses still intrigue me. But I wasn’t intrigued enough for photos this time.  😀

My rolling average was about 14 mph. Finishing in 10:47 put my overall average speed right at 12 mph. Again, we weren’t out to set any records. My only goal was to finish in a comfortable fashion and put one more achievement toward my R-12. I’m now at R-9.

I grew up near Houston, TX and served in the U. S. Coast Guard for over 30 years. I have an electronics background and continue to work in the electronics engineering field. I taught myself the basics about automotive systems as well as how to perform some of my own maintenance (cars and bicycles). I became involved with Amateur Radio and computers in 1995. The explosion of technology has made my job and several of my hobbies quite interesting. My hobbies include Volkswagens, bicycling, photography, electronics, amateur radio, web management, and reptiles. Visit my websites to learn more.
View all posts by Scott →
This entry was posted in Permanents (200km+). Bookmark the permalink.