October 5th marked the 25th anniversary of the Sea Gull Century (SGC). Held on Maryland’s Eastern Shore, the SGC is probably the flattest 100 miles anyone can ride. Flat rides usually mean one thing: WIND. Past years reported plenty of wind and even heavy rain. This was my first time on this ride. The weather was PERFECT. The wind was very light for the first 90 miles. Temperatures started in the low 60’s and eventually reached the mid 80’s. Some felt that was a tad too warm. But I like riding warm. Sometimes I even like it hot. The ride offers three routes, all starting at Salisbury University: a metric century (100 km/62 mi) or one of two full centuries (100 miles). Over 7000 riders rode that day. Riders came from all over the Eastern U.S. I even saw a group from Texas. It was good to have us spread out over three different routes.

I traveled to Salisbury on Friday. I met my good friends Sharon, Jen and Jack on the Chesapeake Bay Bridge Tunnel. I had a surprisingly good cheeseburger at Virginia Originals & Chesapeake Grill, a restaurant located at the edge of one of the two tunnels along the bridge. We met with other friends for dinner at Evolution Craft Brewing Co. We had breakfast the following morning at Dunkin Donuts and then headed over to Salisbury University to gather with 7000 new friends. The campus was crowded! The ride was to start at 7 am. We were early, which was a good thing, but getting started was slow-going. There were photo opportunities and thousands of riders who were in no apparent hurry to go anywhere. I wasn’t in a rush. However, I DID want to get on the road and ahead of some riders.

The reason I wanted to get ahead was simple. Did I mention there was SEVEN THOUSAND RIDERS?  Jen and I talked a lot during the drive up. She warned me that the ride was pretty dicey last year. She was right! The disciplines of the riders ranged everywhere from seasoned dedicated sport riders to casual recreational riders to folks who had apparently dragged their bike out of a year’s storage for a great ride. Such a combination of diverse riders often leads to accidents on the road. Both the riders and their bicycles came in a wide variety of shapes, conditions and vintages. There were plenty of mechanical failures throughout the day. The first 5-10 miles was a time of slow warm-up and exercising patience as we waited for the packs of riders to thin out a bit. The first crash happened in the tunnel before we even made it to the start line. It wasn’t serious since we were barely moving. “See? It’s starting already!” Jen said. The normal rule of calling out “on your left” could just barely apply. Saying anything to a less-than-casual rider being passed was a good way to wind up with them my path. I learned that ringing my bell was a lot safer; and as much as I disliked it, saying nothing at all was pretty safe, too. I made it a point to provide a WIDE berth as I passed. 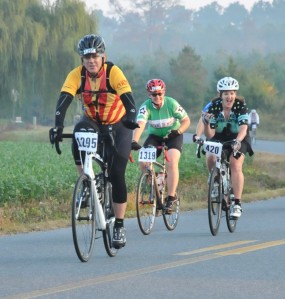 Jen and I discussed a game plan before arriving in Maryland. Last year’s group was on the road until 5:30 pm. I can’t speak for SGC, but returning after 4-5 pm on other rides has been a great way to miss the best food and socializing after the ride. Jen and I were having none of that! Plus, we wanted to get ahead of slower, less experienced cyclists who might pose problems in large groups. Choosing the “minimize our time in the kill zone,” we opted to ride at a brisk pace and manage our rest stops, hovering between 18-21 mph for a lot of sections. Some groups rode faster. “The Three Amigos,” as Jen, Sharon and I are known, stayed together and made good time. It was good to be ahead of the bulk of casual riders. The first rest stop was not too crowded and was well-stocked. A massive group arrived as we left. 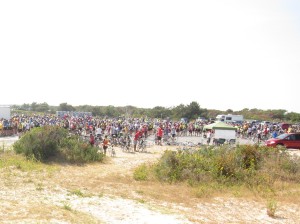 Unfortunately, we saw the results of plenty of crashes. Many were single-rider incidents. A few were large crashes. One rider casually blamed the pacelines. I disagreed. Pacelines weren’t the problem. Riders who don’t belong in or near them pose the greatest hazards on these rides. The other rest stops were as good as the first. The most interesting rest stop should have been the one in Assateague, MD. The area is known for its wild horses. However, the park was closed due to the government shutdown. There were probably more officers enforcing the closure than the park normally employs. What a waste! I saw a small group of horses in the distance. The photo did not turn out well since I didn’t actually stop to take the shot. As you can see from this photo, there were LOTS of riders going in and out of the STATE portion of this area. It was open.  🙂  Sharon, who has a reputation for heavy socializing at rest stops, did a great job of keeping things brief. We were in and out in about 25 minutes (yes, randonnneurs, that was a “brief” stop). I took several photos as we left. The wild horses were gone. That’s okay. They look like domestic horses… just a little fuzzier.  😉

We fell in with a group of about six tandems for a while and followed them to the rest stop at 84 miles where we had apple pie and ice cream. The winds weren’t bad until the 91-mile mark. Jen took a pull into the headwind and then I continued. It was just us Three Amigos into the wind at 16 mph for a stretch. The winds improved after a minor curve and perhaps some tree cover, allowing us to ride at 17-18 mph. There was still wind; but it was easier. I was content to keep pulling. We passed some cyclists… and then some more. I eventually noticed a string of riders behind me. But I had lost sight of Sharon. I figured the new pace late in the ride might’ve gotten to her. I pulled off the front for a second to look for her. There was a train of about 20 riders following me! I didn’t see Sharon. So I got back into position and told Jen I was going to pull off to the left at the next turn to wait. Jen stopped, too. A rider thanked me for the pull as he rode on with the group. Sharon was tucked in the back where I couldn’t see her. “Dang! I lost all of that momentum for nothing!” HAHA! The group was disorganized and riding three abreast with no one wanting to lead within 500 yards. We continued on at a slower pace to stay together. 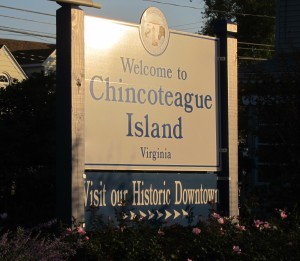 The SGC was certainly the easiest 100 miles I’ve ever ridden. We were done by 2:30 and had plenty of time to change, relax, eat and socialize. The faster 18-mph average rolling pace actually made it easier to finish without feeling burned out from being on the road all day. The flat terrain, relative lack of wind and excellent drafting opportunities made us feel like we were cheating! “Was that really 100 miles?!” We drove to the Chincoteague Inn that afternoon and arrived with plenty of time to shower and get dinner at a small seafood place called “Capt. Zack’s.” It’s a small and rustic carry-out building. The blackened flounder was excellent! The next morning we rode about 15 miles around Chincoteague Island and had breakfast at a small place near the National Wildlife Refuge. The food was very good. Then we headed toward the park. SHOCKINGLY (not), the park was closed and so was every beach in the area. I just love the government – “Make it hurt!” I saw enough of Chincoteague to know I want to return next year or sooner. Off-season is a great time to visit.

Before I go, I’ll leave you with one more image below. It’s the one shot I got of the wild horses. You can make them out if you click the photo and view the full-sized image. Perhaps I’ll see you at the Sea Gull Century next year.

I grew up near Houston, TX and served in the U. S. Coast Guard for over 30 years. I have an electronics background and continue to work in the electronics engineering field. I taught myself the basics about automotive systems as well as how to perform some of my own maintenance (cars and bicycles). I became involved with Amateur Radio and computers in 1995. The explosion of technology has made my job and several of my hobbies quite interesting. My hobbies include Volkswagens, bicycling, photography, electronics, amateur radio, web management, and reptiles. Visit my websites to learn more.
View all posts by Scott →
This entry was posted in Rides (100km+). Bookmark the permalink.