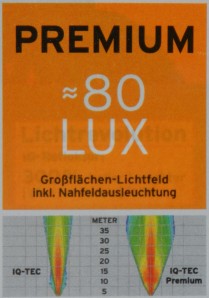 January has been a slow riding month for me. I knocked out a calendared RUSA populaire on New Year’s Day. I had hoped to perhaps complete a permanent as well. However, weather and health issues have compelled me to stay with shorter rides near home. A perm before February is possible, but not likely. Until my next good ride, I’ve decided to write a review (and make a video) of B&M’s new Ixon IQ Premium headlight. I had learned about this light early in December. At first glance, it appears to put out twice the light of the Ixon IQ (80 lux vs. 40 lux) while maintaining the same impressive battery endurance. Research has shown (and reminded) me that the light still casts the same amount of total light (lumens) while making better use of it with a wider and better-focused beam. One of my gripes with most lights is the lack of good side coverage. Being a skeptic, I scoured the Internet for photos or info about the new IQ Premium. I found one good photo which was enough for me to make a purchase. 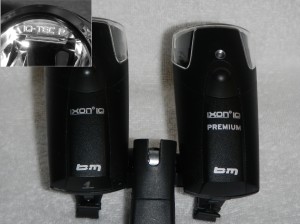 I bought my lights directly from Germany via Starbike.com. Bypassing domestic retaillers saved me over $40. I knew the Premiums were worth the wait as soon as I got them on the road. Knowing I’m not the only skeptic with a bicycle, I decided to take a few photos to show the difference between the IQ and the Premium and share them online. Since the lights look almost identical, I’ll point out that the only visible difference is the word “Premium” on the casing as well as a “P” on the lens housing. My lights came in old packaging and with literature for the 40-lux IQ model. However, there are supplemental stickers to indicate that a Premium is indeed in the box. 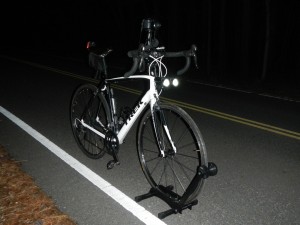 The new Premiums slipped right into my existing IQ mounts. There was no need to re-aim them. My goal was to take back-to-back photos to clearly show the difference between the lights at different settings within the same environment (darkness, bicycle/camera position, etc). To succeed, I needed a very stable platform to allow two-second exposure times. Here is a photo of my setup. This road is painted just like a busy two-lane highway. However, it’s hardly traveled and very dark… exactly what I needed for a good, safe test. 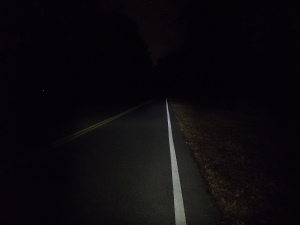 The low power shot of the light was disappointing. Without a thought, it’s easy to assume the 10-lux output of the Premium would appear identical to the 10-lux output of the IQ. However, one must remember that the same amount of light is spread out over a wider area. Also remember that this setting is intended to meet the minimum requirements on German city roads. I believe most riders in the U.S. are going to ride with the light on high power unless they are on well-lit roads. On the other hand, our drivers are so inattentive that I’d leave my light on high power regardless of the street lighting. Odds are fair they STILL won’t see me due to being distracted by their smartphone, a latte or perhaps the bumper they are following too closely.  😉 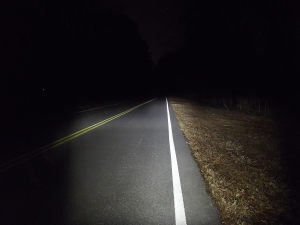 The Premium on high power is another story altogether. The beam is wide and still every bit as bright as the older model. Imagine the IQ’s 40-lux put directly in front of the rider, but with additional 20-lux lobes out to the sides. Of course, the beam is so smooth that there is no appearance of “lobes.” That’s just the best way I can describe the difference between the IQ and Premium beams. Turning on both high power beams is certainly overkill. But it’s still nice to have the option. Click here to see the difference between a pair of IQ’s at high power and a pair of Premiums at high power. It’s quite impressive! 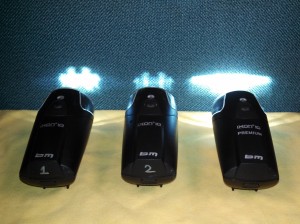 I was eager to see if the new Premium could achieve the same five-hour runtime as the old IQ. I set up three lights: an IQ with year-old NiCads (#1), an IQ with brand new NiCads (#2) and a Premium with brand new NiCads (“Premium” label). I turned on the lights and started a clock. I expected the year-old NiCads to last the longest since I’ve read NiCads perform their best after a few discharge cycles. #2 was the first light to automatically switch to low power and display a red flashing LED. It made the switch at 4.5 hours and ran for an additional 45 minutes before shutting off. The #1 light switched to low power at 4.75 hours and then ran for an additional 1.25 hours. The Premium light stayed at high power for 5.2 hours and then ran at low power for an additional 2.2 hours before shutting off. I’m impressed! Better yet, I’m told a set of Lithium AA’s will run these lights overnight during the summer. I hope to find out this year during a Super Randonneur Series.

That’s the review. I also have a video review HERE if you’re interested. Feel free to post questions if you’d like. I’ll do my best to answer.

I grew up near Houston, TX and served in the U. S. Coast Guard ordnance and electronics communities for over 35 years. I became involved with ham radio and computers in 1995. The explosion of technology made my jobs and hobbies quite interesting. My hobbies include Volkswagens, bicycling, photography/videography, electronics, ham radio, and web management.
View all posts by Scott →
This entry was posted in Product Reviews. Bookmark the permalink.