Half-Marathon Coffeeneuring Ride #7 (Plus a Bonus)

Me? Run a half-marathon? Don’t be silly! I only run if it’s raining and I really need to get to my car. Otherwise, I either ride or just walk and get wet.

A local cyclist asked me to ride as a road marshal in support of The Virginia Running Festival at Christopher Newport University (CNU) on November 9th. Arriving early was an easy way to knock out my final 2014 Coffeeneuring Challenge drink. I opted to ride to the event since I knew the streets would be mostly empty. I hit the dark roads at 5:30am and rode seven miles to a Dunkin Donuts near the venue (12425 Warwick Blvd). Once there, I met a riding buddy, aka my “bike wife,” for breakfast and hot chocolate. We then met with a few other riders, marshaled the 13.1-mile course and then had brunch before calling it a day. My overall distance that morning was 21 miles (she drove me home). 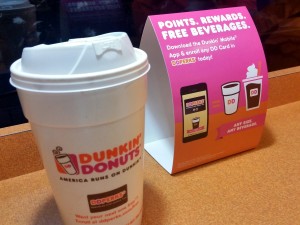 I’m not so sure I could call the CNU Dunkin Donuts “bicycle-friendly,” even at 6am. This store has a reputation for slow service. Today was no exception. There’s really no place to lock a bicycle. Fortunately, the store is so small and has plenty of glass that it was easy to watch my bike while I was inside (and slide metal chairs against it to conceal it in the dark). I would’ve had a different challenge had it been a pleasant day with plenty of outdoor customers. Regardless, the experience went well enough. I made it down Warwick Blvd without getting creamed, I made it to the start/finish with plenty of time to spare and had a great ride with the runners. The only odd thing that day was encountering a police officer riding the wrong way on a divided neighborhood roadway. There was no reason. I figured it was just “some guy on a bicycle” heading right for me, no lights or anything, until he was close enough to identify. It wasn’t even worth my time to comment. I came across other “bike cops” who didn’t ride very proficiently throughout the morning. It was as if the Captain said, “Here, ride this today…”

So that should be a wrap, seven drinks in seven weekends, right? Not so fast! A few weeks ago, I told you about a place I was going to visit. I felt like I was saving the best for last. I knew I wanted to do a coffeeneuring ride on Veterans Day and had saved a Yorktown ride in case of inclement weather. The weather wasn’t too much of a problem so far. But I still wanted to get a Veterans Day ride in the books. I invited my bride, aka my “life wife” (Joanne) to join me. She’s a “just-right weather” kind of rider. So riding with her is a rare treat. Plus, she had never been to my destination. So she was hooked and ready to ride. We drove to U.S. Coast Guard Training Center Yorktown (same location as Ride #2) and then rode 13-miles through the Battlefield tour roads. Basically, if you’re looking at the map, we rode the southern section of the red road, all the yellow, then went west on Goosley Rd until we connected with Yorktown Rd, which took us to the Yorktown Victory Center, and then continued to downtown Yorktown. We stopped at Ben & Jerry’s for our treat just as light rain was moving in.

This particular Ben & Jerry’s is one of my favorite places to stop during a bike ride. It’s very bicycle-friendly. I don’t think there’s a place to lock a bicycle in the immediate area. But we’ve never needed to. There’s plenty of wall around the shop to lean about 20 bikes. I know this because my bicycle club frequently stops there during club rides. The staff keeps a cooler full of ice water inside and allows visiting cyclists to fill their bottles for free. The field across the street hosts farmer’s markets during the summer. Downtown Yorktown is the eastern end of the TransAmerica Trail. Regardless of one’s intention to ride across the country or just a few miles around Yorktown, Ben & Jerry’s is an ideal visit for anyone cycling in the area. I had a “Chocolate Therapy” ice cream cone (description in the photo) and hot chocolate, while Joanne had a mango sorbet smoothie with strawberries.

The rain stopped while we were inside. Our two-mile return to the Coast Guard base began with an immediate 4.5% climb from the York River to the battlefields. It was short, but a good challenge for Joanne since she’s still getting acquainted with her relatively new bicycle (it has almost 100 miles on it). She held up well and even agreed to a small detour down another tour road. We spotted one demented turtle that opted to bask on a cold day and we also spotted a pair of swans. After that, it was one last climb up to the battlefield level (UGH!) for our final stretch to the base. Overall, it was a great ride and an excellent finale to my first Coffeeneuring Challenge. Until next year…

I grew up near Houston, TX and served in the U. S. Coast Guard for over 30 years. I have an electronics background and continue to work in the electronics engineering field. I taught myself the basics about automotive systems as well as how to perform some of my own maintenance (cars and bicycles). I became involved with Amateur Radio and computers in 1995. The explosion of technology has made my job and several of my hobbies quite interesting. My hobbies include Volkswagens, bicycling, photography, electronics, amateur radio, web management, and reptiles. Visit my websites to learn more.
View all posts by Scott →
This entry was posted in Coffeeneuring. Bookmark the permalink.