It’s been 11 months since my last rando, be it a permanent, brevet or anything else. In fact, I haven’t ridden more than 30 miles at one time since October. I had hoped to ride through the winter, but the comfort of a warm home got the better of me.

Southeastern Virginia got a lot more snow and ice than usual, too. The area nearly shut down after each snow event and the roads were a mess for days on end. We’re not equipped for heavy snow removal or suppression. Plus, our local drivers aren’t that safe on dry roads, much less roads with weather-related “challenges.” As a result, this ACP event caught me under-trained. I had a few 25-milers under my belt this year; that wasn’t even close to what I needed to prepare for a 200-km ride. The lack of training has never stopped me before. Bring on the pain! 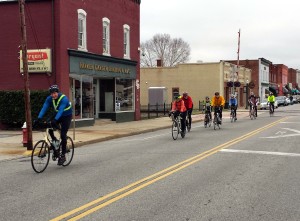 I arrived in Suffolk, VA and was pleasantly surprised to see the largest group I’ve ever seen on a Tidewater Randonneurs ride. I counted 17 riders, including a good friend, Tregg H., who was riding his first brevet. The group set off at sunrise and held a comfortable pace of ~15 mph. The pace then crept up a tad and the group began to separate. I told Tregg, “I don’t know how fast I’ll ride today, but I’m staying in this draft while I can.” He and I hung on for about 13 miles. Neither of us had a 19-mph pace in us, especially not for 100+ miles. We settled into a 16-17 mph groove and eventually had out-of-sight riders in front of us and behind us. I felt good at our first control point in Boykins, VA, 39 miles into the ride. Our brevet administrator signed our control cards and had snacks, water and Gatorade on hand. We had a couple of cookies (thanks Kim S!), topped-off fluids and hit the road.

I think it was about 8-9 miles later when I felt whipped! I was still with Tregg and suddenly felt like I had ridden 100 miles instead of just 50. It was all I could do to hold 11-13 mph. We had a light headwind, but it wasn’t that bad. Tregg was in my draft a bit that morning. This time, it was my turn. He didn’t communicate it, but I think he held back for me. I was glad to have some company for a change. If you’re a regular reader here, then you know our small groups usually result in me riding alone for most of the ride. It gets boring. We made an unscheduled stop at the 50-mile point, Little Texas, VA, for a breather and a banana. I had to stop again 10 miles later. It seemed crazy to take a break with the next control only four miles away. I began thinking about my calorie consumption. According to my heart rate monitor, I usually burn about 500 calories every 10 miles. The sandwich I had for breakfast was 550 calories, a serving that sends most calorie-counters into a frenzy. That, combined with the banana and two cookies, surely did not come close to the roughly 3000 calories I had burned by that point. I needed FOOD!

The next control and turnaround point was a truck stop at 64 miles in Skippers, VA. I usually get a 6-inch sub at Subway. I got a foot-long Sweet Onion Chicken Teriyaki sub, coincidentally their sandwich with the most calories (unknown at the time). Tregg and I enjoyed a leisurely 40-minute stop and were eventually joined by Bob B. Bob recognized me from my Facebook page and introduced himself. The three of us departed with another rider and were immediately split up when I noticed my smartphone wasn’t mounted. For just a moment, I thought I had left it somewhere. I was relieved to find it in my jersey pocket. I resynched the CueSheet app and made my way back toward them. 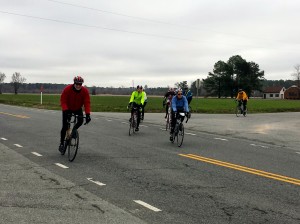 That was when I realized I felt really good. I had none of the morning’s quad pain. I was cruising along at 19 mph. Of course, the slight tailwind didn’t hurt! Tregg was waiting a little way up the road. Once regrouped, he and I began a light pursuit toward the other two riders. Although I was feeling invigorated, Tregg was feeling like his usual 15-mph self. I was content to “bank” that energy and cruise at 15-16 mph with Tregg. I shared with him the passage from the RUSA manual that essentially says (paraphrased) that riders who are feeling tired, worn-out and/or generally cranky almost always feel better after some rest and food. This was the first time I felt it so noticeably afterwards! I eventually opted to speed up and ride at 17-19 mph for a bit. I caught Bob and rode with him for a few miles.

I was disappointed to feel the onset of mid-back pain around the 75-mile mark. I had experienced similar, pinpoint pain on last year’s 300km brevet and blamed it on bike fit. However, I wasn’t riding that bike today.

I decided to stop and stretch my back a few miles before the third control in Boykins. Tregg caught up and we continued. The control was unstaffed this time. So we paid a visit to Boykins Beans & Ice Cream for control card signatures and milkshakes (just a few calories!). We had a nice stop and joined Bob as we departed. Although my back was still bothering me, I was happy to ride pain-free in my quads, my knees, and even my bottom. We made one more unscheduled stop at a new truck stop in Franklin, VA. I’m accustomed to riding through Franklin in the dark. It was nice to see it with the sun up. I grabbed a hot dog since we had lots of time to spare and no need to hurry. My legs were still feeling good. I found myself increasing my speeds and pulling away from Tregg and Bob. I used the gained ground to stand and flex my back as they caught up. It seemed like a good plan. The three of us pulled into the finish at 6:10pm, two and a half hours ahead of the cut-off. We were greeted by a cowbell, pizza and drinks. Overall, it was an excellent ride! Lesson learned: I need to eat more than my usual meals, perhaps even more than I think is “extra.” It’s easy to forget on long rides. Pass Another Cookie,

I grew up near Houston, TX and served in the U. S. Coast Guard for over 30 years. I have an electronics background and continue to work in the electronics engineering field. I taught myself the basics about automotive systems as well as how to perform some of my own maintenance (cars and bicycles). I became involved with Amateur Radio and computers in 1995. The explosion of technology has made my job and several of my hobbies quite interesting. My hobbies include Volkswagens, bicycling, photography, electronics, amateur radio, web management, and reptiles. Visit my websites to learn more.
View all posts by Scott →
This entry was posted in Brevets (200km+), Super Randonneur Series and tagged acp, brevet, randonneur, randonneuring, tidewater randonneurs. Bookmark the permalink.