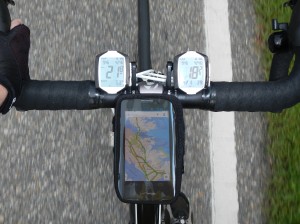 I can’t count the number of times I’ve been asked, “What’s that stuff on your handlebars?” I’ve been a tech-weenie for over 30 years. I’ve considered navigation units, fancy cyclocomputers and other gadgets. I already keep my smartphone charged and with me. Therefore, I’m reluctant to carry more electronics that I must mount to the bike, learn to use, remember to keep charged and recharge during long rides. Instead, I opted to make the best of my smartphone with Andriod apps. This photo shows the smartphone strapped to the stem over top of an external battery pack. Here are details about my equipment: 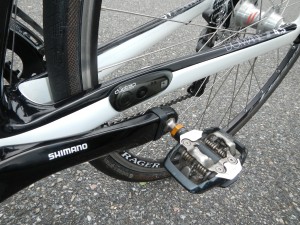 My Node computers (photo above) cover almost everything I want to know. I mounted them on Bontrager computer mounts to keep them centered on the handlebars despite having bag mounts installed there. Both Nodes receive wireless speed and cadence signals from a single DuoTrap sensor in the frame (see photo) as well as my ANT+ heartrate monitor. I use a jogger’s arm band carrier to strap my smartphone to the stem and external battery. I use an Anker portable charger to extend battery life to ~30 hours while using GPS/apps on the road. I attach the battery to the bike using a Handy E-Pack with F66 Fixer.

Good lighting is important for riding during the winter as well as during my rando events. I use a pair of B&M Ixon IQ Premiums for their asymmetric beams and longer battery life. I use a Topeak BarXtender attached to the stem to hold my lights beneath my handlebar bag. Having the light mounted lower casts shadows behind road irregularities while I ride. The lights, computer and smartphone easily coexist with the bag. The clean brake and shifter cable routing allows the bag to ride free of obstructions. I carry extra batteries in my handlebar bag. I may have a wheel built around a dynamo hub for endless power! That’s one of those “if the rando bug bites” kind of purchases.  😉  Here’s my product review of the Ixon IQ lights. Here’s a video description of how I mounted my lights to clear the handlebar bag.

Arkel’s large handlebar bag proved itself quite useful on my second 200km ride. It opens toward the rider and its interior is bright yellow. This combination makes it really easy to find and  grab stuff on the go, especially in the dark. It’s far more efficient than stopping to open a trunk bag when time is critical. I mount my Arkel Randonneur Rack w/TailRider trunk bag when I need more storage. It’s a solution that’s friendly to carbon fiber seatposts by clamping the load to seat rails. The TailRider expands outward for increased capacity. Both bags have a rain fly. I’ve ridden many miles in the rain. Everything inside stays dry. Click here to see an animation with the bags. Watch my video review of the Randonneur Rack and TailRider combo. 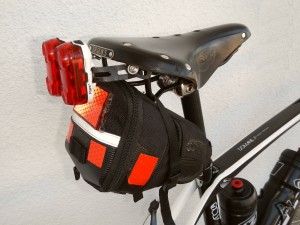 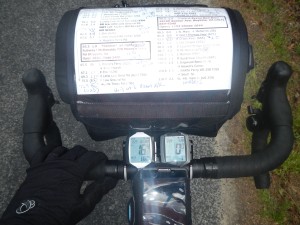 What does all of this get me? The Nodes give me quick access to current speed, average speed, max speed, elasped time, current time, heartrate, calories burned, cadence, distance ridden, and other information. The smartphone running a cycling app gives me the same ride data and adds mapping, navigation, elevation changes, route recording, and other info I don’t need to see while riding.

Best of all, I have an easy view of other apps such as weather, messages from home (no, I don’t text and ride), music, and other conveniences given by the Internet such as the ability to make hotel reservations, hunt down food or find bike shops from the road. The bags ensure I have a high level of self-sufficiency. A light bike is nice. But I’d rather ride a heavy bike than carry a light one.

Sure, it’s overkill on a bicycle, but that’s how I roll!

Click here to see more photos of my bags and gizmos.