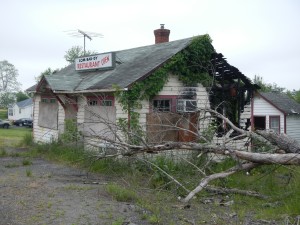 DC Randonneurs (DCR) hosted the Firefly 400k from Warrenton on May 18th.  I charged into my first 400 km brevet just one week after completing my first 300 km brevet.  I drove to Manassas on Friday and was asleep by 7 pm.  I awoke at 2 am, loaded the car, picked up breakfast and was signed in and ready to ride by the 4 am event start.  I was tired, but eager to go.  Little did I expect as I rode into what would become a wet and cold day that I’d have to terminate my ride, a “DNF” (Did Not Finish).  I abandoned to prevent my ride from turning out like this restaurant (photographed during my transit back to the start).  I’m inclined to have little to say.  But, as I posted in Why Read My Blog, I’m here to write about my shortfalls as well as my triumphs.  Here it goes… 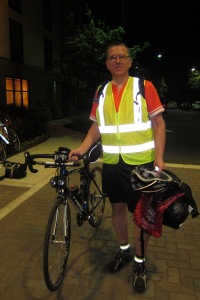 My ride got off to a good start.  I was a little tired.  But who isn’t at 4 am?  😉  I knew better than to try keeping up with the other riders, especially as we rode into the hills.  I practiced a little discipline and rode at a comfortable pace.  I could see a few others were practicing some restraint as well.  My B&M Ixon IQ headlights were great along the straights, even at speed.  They fell short as I entered some of the sweeping turns.  Luckily, I had mounted my old Cygolite Expillion to my helmet.  I like to use it for sweeping the area for deer, a real hazard in my area.  I used it exclusively for faster descents and cornering on this ride.  It was great for shining the areas into a turn where my forward-facing headlights were not pointed.  I turned off the lights as daylight came, switching to a white Knog Beetle LED set to slow flash.  I set my tail light to flash since no one was behind me (last again… I know, shocking!).

A funeral procession of dozens of cars I let pass on a long climb while I nibbled on a foot long Italian sub.

Here are a few of the things I learned, either from something I got wrong or gladly got right: 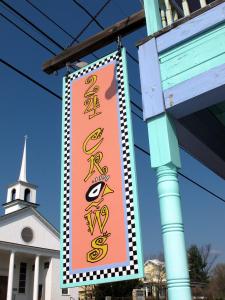 While I was stopped at an intersection in Flint Hill and contemplating my next move, I noticed someone had walked out of a little building with a cup of coffee.  That building turned out to be “24 Crows,” a small coffee house and gift shop.  Seeing that I was only 23 miles from Warrenton (thank you, Smartphone!), I opted to make a stop for hot chocolate, mint chocolate chip ice cream and to notify DCR event coordinators of my intentions.  It was 2:30 pm.  The owners were very kind and friendly.  I recommend 24 Crows as a stop on future rides.  I left after about 30 minutes or so and headed back toward Warrenton on a “bicycle route” calculated by GoogleMaps.  The remainder of my ride was uneventful.  Hwy 211 was a bit busy.  But I felt safe enough since it’s a four-lane highway which provides plenty of passing room.  I made it back to Warrenton at 5:40 pm, before darkness and additional rain.  I let everyone know I was safe, packed the car and drove back to my hotel.  I went to bed at 8 pm and slept uninterrupted until 7 am!  I got on the road to drive home around 9am and was already sleepy by 10.  UGH!  I definitely didn’t manage my rest very well.  I’ll have to work on that.

Let me share some stats since that’s what I do.  😉  My rolling average was about 12 mph.  My overall average was 10 mph the last time I bothered to check.  My steepest climb was 10% while my longest climb was 5.75 miles (1.5% average grade on that climb).  Twenty-six riders departed on the ride.  The fastest riders completed the ride in 17.5 hours (overall average of 14.5 mph) while many finished in 20-25 hours.  One rider was a “DNQ,” meaning he finished the ride but did not qualify within the minimum time required.  Three of us DNF’d.  I’m curious to know what compelled the other two to DNF.  I think one may have been underdressed and concerned about the weather.  But I’m not sure.  Noteworthy to mention is the fact that all riders returned to Warrenton under their own power.  Why is this important?  There is NO SAG on these rides!  I don’t think all of my non-rando friends understand what “unsupported” truly means.  My next entry will discuss that.

My plan was to complete the 400 km ride and then tackle the 600 km ride on June 1/2.  Some think I should go for the 600k.  But I’m inclined to recover, assess my training and resting plans, and then try another 400 when I can.  I feel I need to complete the 400 and feel good about it before I invest the time and money to attempt the 600.  So no 600 km for me on June 1/2.  I’ll look for other opportunities to complete 400 and 600 km rides in 2013.  However, the out-of-town events tend to get expensive and take more out of me than closer events.  It appears that achieving the coveted “Super Randonneur” (SR) title may not happen for me in 2013.  “Everyone would do it if it was easy,” right?  😉  I will continue to pursue the R12 and then hope to return a little stronger and better-prepared in 2014.

I grew up near Houston, TX and served in the U. S. Coast Guard ordnance and electronics communities for over 30 years. I became involved with ham radio and computers in 1995. The explosion of technology made my jobs and hobbies quite interesting. My hobbies include Volkswagens, bicycling, photography/videography, electronics, ham radio, and web management.
View all posts by Scott →
This entry was posted in Brevets (200km+), Super Randonneur Series. Bookmark the permalink.