What is an “Unsupported Ride?”

My only riding partner during many long rides…

I didn’t think I’d see a day when I’d consider 100 miles to be “just a century.”  Now I ride 200 km (>124 miles) rides every month of the year in pursuit of Randonneurs USA’s R-12 award.  I also completed a 300 km (189 miles) brevet while attempting to earn a Super Randonneur award.  I failed during the 400 km (252 miles) brevet.  But I will try again.  These rides are in addition to “regular” century rides ridden with local friends.  Some were surprised to learn I had to find my own way back to the host hotel when I abandoned the 400.  Apparently, some of  the things which make randonneuring different from other forms of long distance cycling had escaped them.  They know I carry a bunch of stuff, affectionately calling me “Captain Overpacker,” in my drive to be self-sufficient.  However, the full meaning “self-sufficient” may need further explanation.

First, the obvious:  I carry the things I think I may need to repair common breakdowns such as  tubes, a patch kit, tire levers, a spare spoke, tire boots, a multi-tool, and Dumonde Tech lube.  I even carry a folding tire on rides longer than 200 km.  Then there are the things I carry for my body such as Chamois Butt’r packets, a first aid kit and  a separate box which contains tweezers, folding scissors, Tylenol, insect sting capsules and Immodium AD.  I’ve either used or wished I had everything in this bag at one point or another.  Most understand when I say I need this stuff to be self-sufficient.  They also understand that I either pack or purchase my own food and drinks along the way.  Again, self-sufficient. 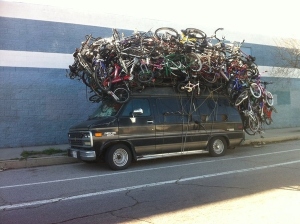 But another part of the game is there is no SAG support.  Not only does the organizer not provide it (neither the rules nor staffing levels allow it), but participants are not allowed to bring their own SAG vehicles, either.  That’s not to say one cannot have help nearby.  The help just cannot meet riders anyplace other than designated control points.  Violating this rule is means for immediate disqualification.  That said, a driver can meet a rider anyplace on the course if the rider has called to abandon the ride.  Otherwise, randonneurs are on their own with regards to finding a way home or back to the start/finish if they must abandon.  This is why out-of-town events concern me.  Sure, I guess I can inconvenience my wife by having her drive 2-3 hours each way to pick me up if I must abandon a “local” event.  But this is a much greater problem if I’m riding outside of my region.

Randonneurs not only need to be self-sufficient; they need to have an escape plan in case something goes wrong.  A list of who to call, perhaps friends in the area, a cab company or someone who might be staying in your hotel is a good thing to carry on a brevet.  A pick-up can be expensive and time-consuming for all involved.  That’s why most randonneurs do whatever they can to return to the start/finish under their own power, even if they’ve abandoned the official route.  The obvious exceptions are injuries or catastrophic failure of a bicycle part.  Regardless, that does not change the fact that there’s  NO SAG SUPPORT provided or allowed.  It adds another dimension to riding these events out of town, doesn’t it? 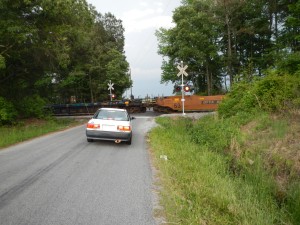 This train held me up for a few minutes.

Mechanical breakdowns are not the only reason to DNF or DNQ a brevet.  For a rider who rides near the minimum allowable pace, drastic changes in the weather or traffic can impede one’s ability to finish or qualify (within time limit).  I once rode a rainy randonnee which had a long funeral procession and a train delay which cost me a combined 20-minutes.  Couple that with a hot day with a need for cool-down breaks and a slow pace and I’m sure you can imagine the impact to the planned timeline.  What if I had left on a 200 km ride without lighting or reflective apparel because I expected to finish before sunset?  Not complying with low-light riding rules is grounds for immediate disqualification.  What then?  Riders aren’t SAG’d home just because they’re DQ’d.  Plus, it would really stink to get DQ’d while close to the goal.  Therefore, most successful randonneurs carry backup lighting (see photo below). 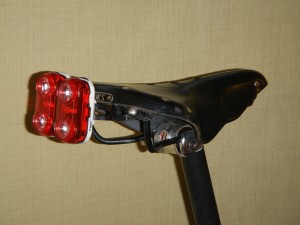 Speaking of lighting (veering off-topic), I did something new with respect to mounting my taillight.  DC Randonneurs’ Regional Brevet Administrator issued an announcement regarding the long-standing RUSA rule which requires all lighting to be “attached firmly to the vehicle” (many state laws read similarly).  His point was that a tail light hung to a saddle bag strap which sways about while riding is not very firm; nor is it likely aimed appropriately while in motion.  I see plenty of examples of taillights pointed everywhere but ideal on my local rides.  I took his announcement to heart, particularly about whether being cheap or a “weight weenie” is worth the risk to my life or limb.  It took little time or money to bend up some metal and bolt my primary and back-up tail lights directly to my Brooks saddle.  The lights look misaligned from some angles.  Rest assured, they’re aimed right where I want them: In the direction of approaching drivers… not their passengers… not following cyclists… DRIVERS.  I’m happy with the result.

I hope this clears up some of the mystery behind what sets randonneuring apart from other forms of cycling.  I love a well-organized century with SAG support and lots of food/drinks provided as much as the next rider.  I don’t discount them at all.  But, if you find yourself wondering what to conquer after several centuries, then take a look at randonneuring.  You might find the challenge worthwhile.  Just remember that there’s NO SAG SUPPORT.  Good planning is part of the game!  🙂

I grew up near Houston, TX and served in the U. S. Coast Guard for over 30 years. I have an electronics background and continue to work in the electronics engineering field. I taught myself the basics about automotive systems as well as how to perform some of my own maintenance (cars and bicycles). I became involved with Amateur Radio and computers in 1995. The explosion of technology has made my job and several of my hobbies quite interesting. My hobbies include Volkswagens, bicycling, photography, electronics, amateur radio, web management, and reptiles. Visit my websites to learn more.
View all posts by Scott →
This entry was posted in General. Bookmark the permalink.

2 Responses to What is an “Unsupported Ride?”