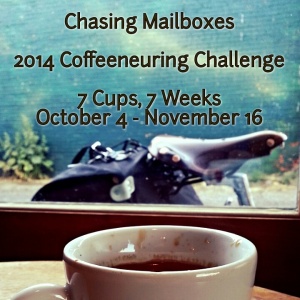 I’m a man with some irony in his life. I’m an electronics technician who loathes electronics that don’t work without fault on an eternal basis. I recently started a bread-free diet and then began to visit Panera Bread to satisfy my wish for breadless meals on the run. Finally, I don’t drink coffee (never have), but I find myself undertaking the 2014 Coffeeneuring Challenge, a series of bike rides which focuses on cycling to different coffee shops. Why do that if I don’t drink coffee? To be honest, it’s taken a while for me to take the plunge. I first learned of coffeeneuring when I started to rando in 2012. I was searching for ultra-distance riding tips and tripped over a rider’s blog called Chasing Mailboxes. The author, Mary G., has an engaging way of sharing her cycling adventures. That’s saying a lot for me since I tend to be a bit un-inspirable most of the time. Mary manages to stir my desire to take on cycling adventures of my own. I almost feel a connection with her, but not in a creepy-online-stalker kind of way. HAHA! I was intrigued when I first saw her coffeeneuring challenge in 2013, but not enough to ride “just for coffee” or even my preferred hot chocolate, a coffeeneur-approved substitute. 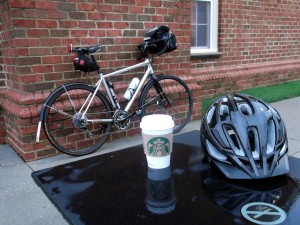 I developed a plan of attack for this year by making a list of shops I could visit and identifying locations where I would start/finish each ride. The challenge began on October 4th, the same day as Petals for the Cure (P4TC), which raises awareness for breast cancer and benefits Beyond Boobs. P4TC didn’t start until 8am. So there was plenty of time for me to arrive early, visit the closest coffee shop and return in time for the pre-ride brief and departure. I arrived at Anderson’s Home and Garden Showplace, P4TC’s starting place, at 6:30am on wet roads just minutes after the overnight rain had stopped. I unpacked my bike and got ready for my coffeeneuring ride. I prepared for the wet roads by riding my “fender bike,” a bike I hadn’t ridden since my back strain in April. I rode 1.7 miles to a Starbucks (762 J Clyde Morris Blvd) and ordered a “tall” hot chocolate. By the way, let’s be honest and call it what it is, “small” or “short?” Although there was no place within view to lock the bike, the store is “bike-friendly” enough in that I could stuff it between some bushes and a window that was visible while I placed my order. I returned on a less-busy 2.8-mile route which allowed a right turn into Anderson’s to prepare for P4TC. 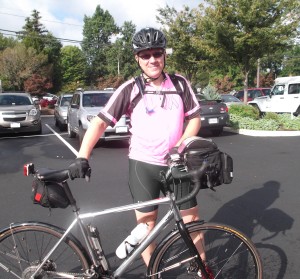 My remaining coffeeneuring entries will likely either stand alone or be condensed into one post. Still, I must make mention of a very special ride, the 2014 Petals for the Cure (P4TC). P4TC is in its fourth year and slowly growing in popularity. This was my first P4TC. Nearly 200 cyclists rode on what turned out to be a great day! The roads were only a little damp at 8am and were mostly dry within an hour. I was curious to see how the diverse group of riders would contend with traffic and the busy intersections nearby. It wasn’t a problem. Newport News Police Department had a very strong showing, had closed an entire lane for us on two busy roads and provided stop-free road crossings at nearly every intersection. I dare say we had more police support on this quaint, 22-mile ride than I had seen on many organized centuries. EXCELLENT JOB, organizers! I suspect I’ll take part in this ride in the coming years. Until next time…

Pretty In Pink (a movie from my teen years),

I grew up near Houston, TX and served in the U. S. Coast Guard for over 30 years. I have an electronics background and continue to work in the electronics engineering field. I taught myself the basics about automotive systems as well as how to perform some of my own maintenance (cars and bicycles). I became involved with Amateur Radio and computers in 1995. The explosion of technology has made my job and several of my hobbies quite interesting. My hobbies include Volkswagens, bicycling, photography, electronics, amateur radio, web management, and reptiles. Visit my websites to learn more.
View all posts by Scott →
This entry was posted in Coffeeneuring, Special Rides and tagged breast cancer, coffeeneuring. Bookmark the permalink.