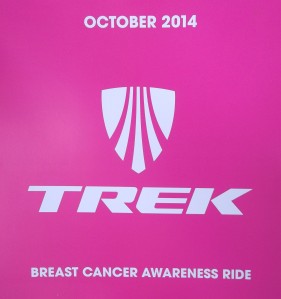 October is Breast Cancer Awareness Month. I rode in my second breast cancer awareness event, BikeBeat‘s inaugural Breast Cancer Awareness Ride (BCAR), from their shop in Chesapeake on October 11th. Like the previous weekend’s Petals for the Cure on city streets, this ride featured plenty of wet roads, thanks to the overnight rain. Unlike Petals for the Cure, Chesapeake’s wet roads lasted much longer due to the morning’s torrential downpours and the route’s country roads with lots of tree cover and lack of abundant drainage. It was a good day to ride my CrossRip with fenders! The weather forecast was promising, even with the morning rain and wet roads. Approximately 75 cyclists arrived to ride one of two routes. I chose the 65-mile option. 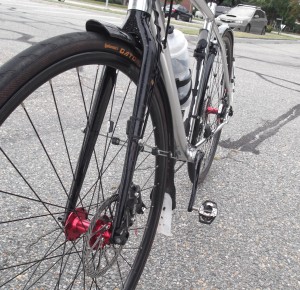 I believe many of the participants were also a part of a regular Saturday morning ride which begins at the Chesapeake BikeBeat. As such, many in the group rode their sleek road bikes at a brisk pace on familiar roads. I settled in with approximately 8-10 riders from Team Chain Reaction. They maintained an easy warm-up pace of about 15-16 mph for a few miles and eventually increased to 18-19 mph. I wasn’t sure if I’d keep up on my 35-lb tank with its inefficient handlebar bag and fenders. Every turn and change in speed felt like interval training. I rode a few feet back and off to the side of the riders in front of me to avoid wheel spray. The riders behind me did not have that problem.

I heard several comments about how nice it was to ride behind a bike with fenders.

This photo shows the only part of my bike that got dirty… from OTHER bikes. I did manage to get a few mud speckles on my pretty pink jersey. Otherwise, I did a great job of staying clean and dry… and no “mud stripe” up my backside. 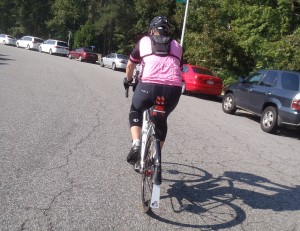 This was my first ride of more than 40 miles since the Tour de Cure in April. I was FEELING IT. I was no longer accustomed to being in the saddle for so long. I had also acclimated to riding my lighter Domane. As a result, my legs were wimpy and feeling sore.

I need to ride the tank more frequently! I suspect other riders in my group were getting tired, too, especially after enduring headwinds for 10 miles in the middle of the course. I make that assumption because I wasn’t struggling to keep up. The group spread out a little during the last two miles. “Barn Door Fever” often hits some riders as the end of the ride approaches, compelling them to ride faster for a strong finish. I maintained a 17-mph pace and didn’t do anything heroic. I finished my ride and enjoyed a juicy cheeseburger, fresh from the grill. I felt good with the exception of sore quads. They ached as if I had ridden 150 miles instead of only 65. That would pass, especially after a coffeeneuring ride the following morning.

The organizers of BikeBeat’s Breast Cancer Awareness Ride deserve a congratulations and a big thank you for pulling off their first event (a first for these organizers, anyway). While 75 riders seems like a club outing in some locations, attendance is bound to increase in the coming years as word spreads. I know I’LL be there in 2015. Perhaps hundreds more will join us! Until next time…

I grew up near Houston, TX and served in the U. S. Coast Guard for over 30 years. I have an electronics background and continue to work in the electronics engineering field. I taught myself the basics about automotive systems as well as how to perform some of my own maintenance (cars and bicycles). I became involved with Amateur Radio and computers in 1995. The explosion of technology has made my job and several of my hobbies quite interesting. My hobbies include Volkswagens, bicycling, photography, electronics, amateur radio, web management, and reptiles. Visit my websites to learn more.
View all posts by Scott →
This entry was posted in Rides (100km+) and tagged bikebeat, breast cancer. Bookmark the permalink.